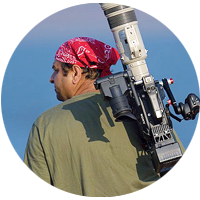 His various films on variety of subjects have been screened at many national and international film festivals. Films created by him are not only exceptionally creative in terms of camera but also meaningful and thought provoking in the content and story.

Apart from his own films Kiran has also created films for Indian forest department and some international NGOs based in US and Africa, Some of which have been broadcasted and wildly appreciated on national and international television. In addition to wildlife he has tried his hands on a biopic of a legendary forester and also some story based short films and feature length commercial film.

When not filming Kiran loves to travel and do photographing. Many of his photographs have been published in the national and international magazines, books and adorned the walls of various exhibitions. He is often invited to give guest lectures at various institutions on filming and photography. He has also written articles for various magazines and newsletters.

Kiran is associated with many NGOs working for conservation, environment related awareness and saving or rescuing wildlife campaigns.